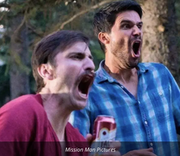 The movie is mostly light-hearted but it also spends time grappling with topics like masculine insecurity, arrested development, and the fear of change. When the film gets serious, the performances adjust accordingly and the tone of the film itself shifts effortlessly. Toward the end of the film, there are revelations made and pedestals dismantled that work well, for the most part. The dramatic moments work really well by and large because the characters are so likable despite their very distinct flaws. Man Camp is a very fun comedy that delivers on laughs and a surprising bit of heart.”

‘Man Camp’ is largely a win for its director, writers, and actors.  The exaggerated characters, wild plot, and broad, slightly raunchy comedy evoke movies like Old School and Step Brothers, but – and yes, I actually mean what I am about to say – the script is often wittier than in those high profile movies.  Man Camp was written by Cummings, Kruse, and Josh Long, and there are many lines of dialogue that are strikingly funny (as when Kevin explains his business model of buying alcohol for those who were ‘simply born too late’. The script is aided by terrific performances from the actors. It has such a bright, funny script and features such engaging performances that it makes me eager to see what the talents behind it will do next.”

‘Man Camp’ was absolutely silly.  It has slapstick comedy and a simple story that lets you enjoy the characters.  There isn’t any depth or development for the characters here; the plot focused heavy on the comedic antics and skits driven by the man children roles each of the 3 sons had.  But the main character’s performances and vibrant personalities are just enough to get the job done.  They truly were cohesive on screen. Man Camp has enjoyable performances, a light-heated story, and a feel good comedy ending…” 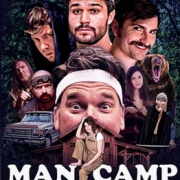 ‘Man Camp’ is a shaggy, silly good time that also offers a surprising amount of heart.”

Rotten Tomatoes Raves/Reviews are In! 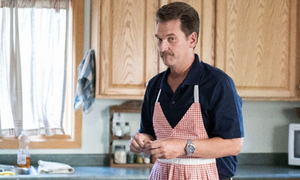 “’Man Camp’ is a wonderful surprise, a smart and funny look at family bonds and the ways we prevent ourselves from growing up.” 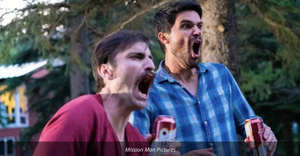 “Tammy Kaitz, who plays Theresa, the mother to our trio of Mann (yes, that’s their last name) brothers, looked quite familiar to me. As it turns out, this was my first time seeing her in anything. I think this is a testament to her performance. She feels like someone you already know. And her chemistry with the rest of the cast is fantastic. She’s natural, yet funny, and has a depth to her not normally seen in these types of comedies. I really enjoyed the character.”

Sharp-looking, despite being made on the cheap in under a month, The Bone Garden is made in the true spirit of indie film-making, a friend-and-family affair…It’s a tastefully restrained whodunit with a mondo payoff and the denouement will be apparent to only the most keen-eyed observers.”

It was also really cool to see Savage and Kratka who both starred in FRIDAY THE 13TH PART 3, back on screen together. They both do fantastic and whether you love or hate the characters, the acting is stellar.The same is true for Kaitz. She portrayed a tough as nails, fun loving, partying gal who watches out for her best friend no matter what. There were some conversations and reactions between Laurie and Alice that reminded me of things my best friend and I would say to each other. Overall, I can’t recommend this movie enough. It was well-done and had a great pace. Though the ending leaves many questions unanswered, it’s certainly a first. Horror fans will get a kick out of the many ‘spot me’ references and more than a few that are ‘in your face’ but still done really well.”

A highlight of the production is the painfully endearing efforts of recently widowed Mary (Tammy Kaitz) to make the tentative effort at actually initiating intimacy with Katie’s ex-hubby Joe, a nice guy she met at a bar who happens to be “age appropriate.” Their eventual meeting of the minds as to what can and cannot happen is a telling example of scripter Lewis’ ability to achieve compelling veracity within the interactions of needy souls.”

Kaitz is a marvelously complex Wanda who, though intimidated by the wealthy Rachel and dominated by her own volatile husband, still exudes a deep-rooted sense of stability and integrity.” 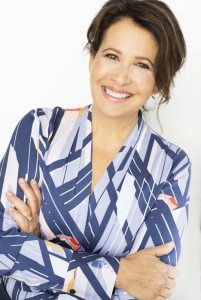